We can all agree that on projects, digital or otherwise organization is an essential part of working efficiently.

Sometimes you can be surprised by the complexity of a project, maybe you didn't realize you'd need a 3D scene or that there would be a 30 and 60 second version of the video. At this point, your assets are in use and you can't move the files or they'll go missing from your projects.

And then inedibly, another freelancer is brought in to "help out", and now the constant "where's the logo?" starts...

Are you frustrated yet? 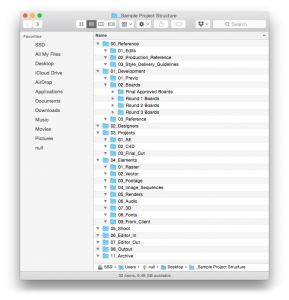 I've pretty much stolen this concept from years of freelancing at studios far more organized than myself, and here's why it's so good:

It's chronological. The first step in the project is gathering references – "00_Reference". Next, previz – "01_Development",  followed by After Effects an project – "03_Projects", etc. As the project progresses you'll naturally work your way down the folder structure from 00_ to 11_.

The "##_Name" folder naming convention may seem strange at first, but get used it, the order of your folders is now controlled by logic, not where their letters fall in the alphabet.

"Where's the latest render?" How many times have you be asked that? Well, with this setup, there's only one place for it to be: "08_Output". Inside that, I suggest folders organized by date, and with clearly named files, you'll be every project manager's best friend.

Thanks @carli, I’ve got the link all fixed up.

Great way to start being organized.